Today’s walk was fraught with concerns because I had planned to camp the night on Jefferys Track. Then on top of this the rain added to our concerns as we had been informed by a friend on Facebook that a troop of about 50 four-wheel drive (FWD) vehicles had driven over Jefferys Track on yesterday (Saturday).

The quantity of rain made the track very suitable for FWD drivers to go out mudding and I was concerned there would still be some crazy drivers up there today. Also I had no idea what the conditions were like to camp on the side of the track so I made the decision to have Paul drive me in as far as he could and walk the track in one day.

Fortunately it was not raining today, however it did not take long to see the evidence of what effect the rain had once we had traveled a short way up Jeffereys Track. We stopped at a point where Paul had room to turn around and I put my gaiters on to walk off into the unknown.

The further I walked the puddles, well you could almost call some of them pools, got bigger and deeper. There was plenty of space to get around them I just had to make sure I was looking where I was going and pick the best path through.

If you are at all interested just google images or videos on mudding or FWD mudding and you will see how road like Jefferys Track are used for mudding. You can see in the pictures below how the FWD vehicles can carve up a dirt road over time.

After about two hours of walking and not seeing a single ‘mudder’ I turned into White Timber Track and even though the puddles were not as deep they became wide, some so wide that it became difficult to walk around them. At this point I was very glad I had my walking poles as they became most useful to navigate these expanses of water.

Stabbing the poles into the puddles for stability I walked sideways placing my feet where I could on dry land among the bushes on the side of the road half leaning over the water. I am not sure if this description makes sense, however to say the least it was awkward and there were times I thought I would fall into the puddles when I misplaced my step or pole. Eventually the large puddles subsided and I started to walk downhill eventually turning into Judds Creek Road. 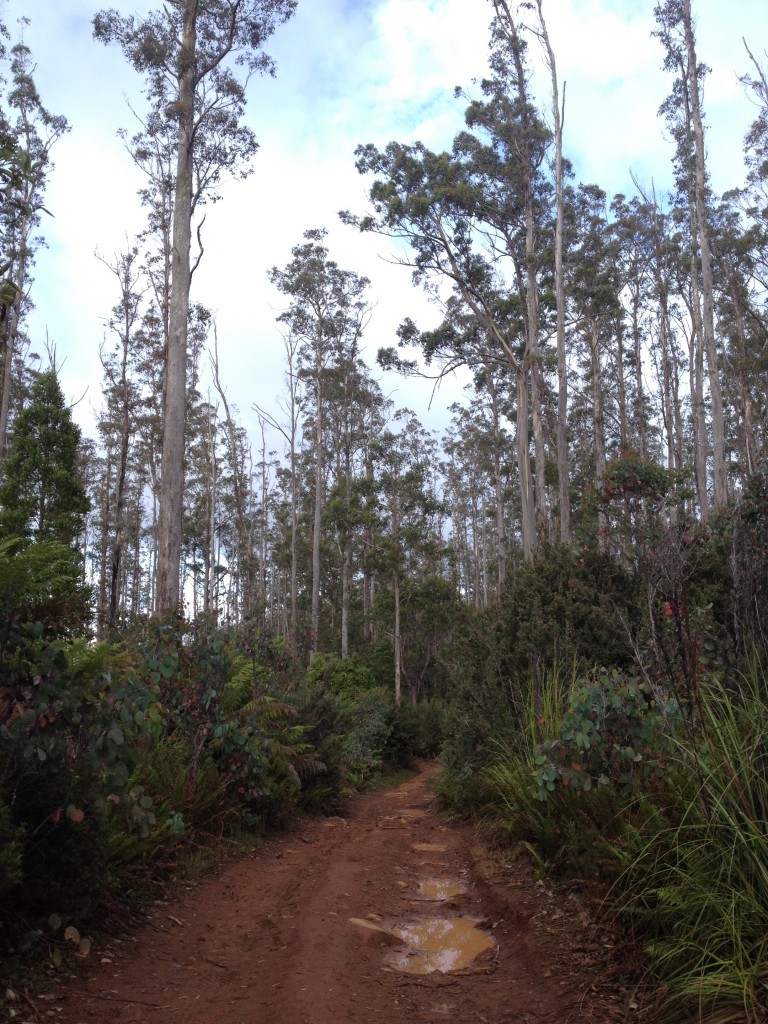 This road was particularly hard underfoot and my feet were beginning to feel the wear of gravel grinding beneath the soles of my shoes. Tiredness took hold of me and I began to walk willy ninny along the road. I usually try to keep to one side incase there are any approaching cars, however on the days when I did not see a vehicle all day I found I became more careless with where I walked, especially when I was tired.

Today was the first day that I thought I will be glad when this walk is over and on reflection it was mostly due to the fatigue I was feeling and the pain I was experiencing in my feet. Despite people telling me that my feet would improve the more I walked, this was not the case. Every day I endured a lot of pain in my heels, especially at the end of a days walk.