Waking in the comfort of a bed and not having to pack up the tent and bedding was a luxury and I felt a little more refreshed after a good night sleep. The morning was clear and cool as I walked along the Marlborough Highway that stretched off into the distance ahead of me. It is a beautiful morning with a clear blue sky that stretches above me as the road stretches before me.

The Forest Ravens swirl above singing korr korr korr as they swoop down to the road kill that I can see ahead of me. There were many times I have wanted to capture images or videos of birds along the trail, but unless I was willing to sit for long periods of time and had a telescopic lens then I had buckley’s* chance of doing it. The flat landscape of the Central Plateau eventually changed as I passed Little Pine Lagoon and bushland began to line the sides of the road. 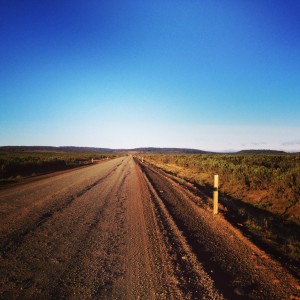 The Tasmanian Trail website had listed in their updates that you could no longer take the trail listed in the guidebook 3km (1mi)  passed Little Pine Lagoon. Before I left to walk the trail I contacted the Secretary and found out that the land was now owned by Land Conservancy. Though technically I should stay on the Marlborough Highway the secretary did say that the Land Conservancy don’t oppose walkers entering their land. I was glad to hear this because I wanted to  turn down Roscarborough Road to save me walking many extra kilometers to get to Pine Tier Lagoon. Not long after entering the bushland area I saw Paul waiting for me at the side of the road where a sign said Roscarborough Road, it seemed too soon to see him, I could not have walked 12km yet! But there he was with an offering of a cup of coffee and a biscuit, how could I resist. After some discussion and looking at maps we realised that I this was not the point at which I wanted to make my turn and I still had about another 6km (3mi) to walk before the turn off I wanted to take into Roscarborough Road. I still had about 12km (7mi) left to walk. I usually like to have the 12km under my belt before my break, that way the afternoon walk does not seem such a trudge. 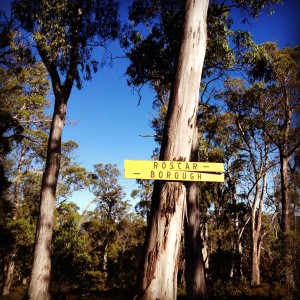 The signage that tricked us 🙂

As I continued to walk into the afternoon two things awe-struck me. First the brilliant blue of the sky above and the glorious green of the leaves against it. The photos I took did not do it justice it was just so stunning to look at. The second was the silence and strength of the bush around me. I could hear noises but there was a deep undertone of silence that resonated and the trees stood straight and tall oozing a powerful strength. The combination of these gave me a sense of awe and appreciation of being alive to experience it. Words and images can never truly express the feelings you experience in the moment. 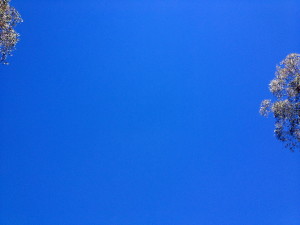 Pine Tier Lagoon eventually came into view and I knew my walking for the day was coming to an end. This Lagoon is a familiar sight to me as it is one of Paul’s favourite fly fishing spots and he was down there fishing somewhere as I walked towards it. Seeing our blue car bought a sense of relief because soon I would be resting my feet again and munching on some food to stave off the rumbles that had started my stomach. It was not long before I saw Paul walking back from fishing disturbing the cows that grazed by the Lagoon. 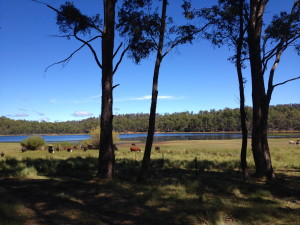 * (Australian slang for no chance)