After a later start than expected due to waiting for the RACT to arrive to buy a new battery for the car I was off. As I began walking away from Paul I felt a little weird, I don’t know how else to describe the feeling so weird it will have to be. I kept looking back at Paul and waving good bye, it just seemed to be the right thing to do.

About 10 minutes into walking down the road it hit me that I was actually doing what I have wanted to do for eight years and had spent the past three months training and preparing for. I allowed the wave of emotion to wash over me and I began to cry, that face scrunched up type of crying. 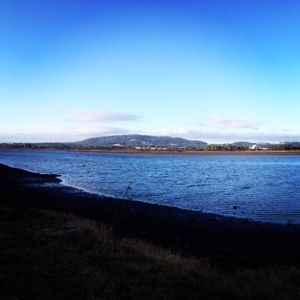 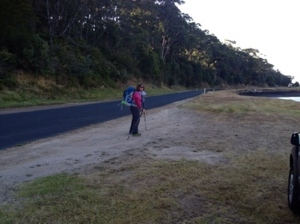 Walking away from Paul for the first time

I settled into walking and taking in the scenery around me with the Mersey River to my right I was glad I chose to start on River Road in Ambleside. My first five kilometres was a breeze and I arrived in Latrobe about 10.30am. 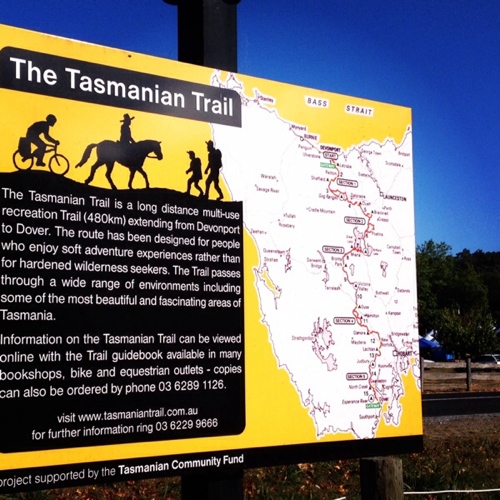 I needed (or should I say wanted) a coffee so ambled into Latrobe on the search for a cafe open on a Sunday morning. There were a lot of people in town and it was not long before I found a place to quench my addiction. After ordering a coffee I sent Paul a text to let him know my whereabouts and lo an behold he was just down the road filling up the car with petrol. Five minutes later he joined me for a coffee and a chit chat about how things where going. 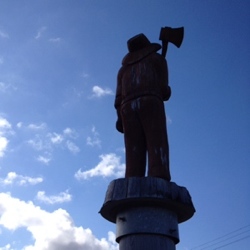 Axman of Latrobe, town of Axman Hall of Fame 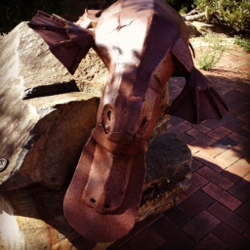 I felt strong and happy as I left Latrobe. It was not long and I was walking through dairy farming country and the smell of cow manure filled my nostrils. The flys began to hover and stick on me as I said hello to the cows staring at me from the paddock they were housed in. I passed a sty and sign for fly fishing access to the Mersey river and I couldn’t help myself from taking a quick photo and texting Paul to let him know so he could take the opportunity for some fishing while in the area.

I finally turned Old Deloraine Road, my first dirt road passing some lovely farming areas then into Native Plains Road where I hoped to find a nice spot to stop and eat my lunch. Lunch was eaten standing up with my pack sitting on a cut stump of a tree and ants crawling around my feet. 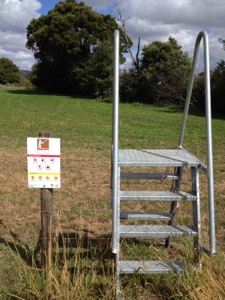 I made it to the Mersey river crossing where I took a twenty minute break and sat by the water to have the rest I had hoped for at lunch. Having taken off my shoes I put them back on with thoughts of wishing I could just stay here until the morning to recover.

As I started to walk again I realised how sore my feet were and the top of my left foot gave me pangs of pain with each step. I staggered into Railton with every inch of me wanting to just lie down and put my feet up, it was a hard last few kilometres.

Paul greeted me on the edge of Railton letting me know the free camping spot was only for self contained vehicles so we decided on booking a room at the only pub in town. I had read that they had recently purchased new beds and bedding and at this point I could think of nothing else than lying on one and recovering from my first 23.7km walked. 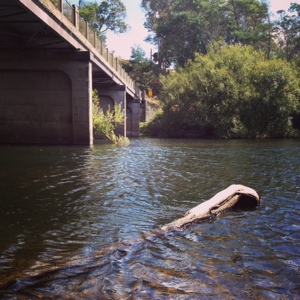 Resting on the Mersey River

My only reply can be KEEP GOING it will get easier. Look at what you are SEEING. Mumxoxoxoednasmith

Thank you Mum for all your support and encouragement. I Love you lots. xoxo

Hi Rachelle, I am glad you are enjoying the updates. 🙂 it had been more difficult than I thought it would to keep up the blog posts on the road.

Love you too. Mum xoxoxo

Once again I can only say— keep going you will never regret it even if it is NOT easy. Tell Paul to keep up the good work. Love you both.
Mum xoxoxoxo