We half reluctantly packed up knowing this will be the last real bed we would be sleeping in for two more weeks, at least we have Bronte Lagoon Shack to look forward to as our half way point of our trip. We had concerns about where we will be camping on our second night as my 20km end point would land us in the middle of farming country.

Feeling refreshed from getting a good nights sleep, thought my feet were still sore and my legs very stiff, I put on my walking shoes and began to walk towards Paradise. I have often passed the sign to Paradise on my journeys around Tasmania and have wanted to visit and now I will be walking through the area and I was looking forward to it. The scheduled rest stop today is Sheffield the town of murals. 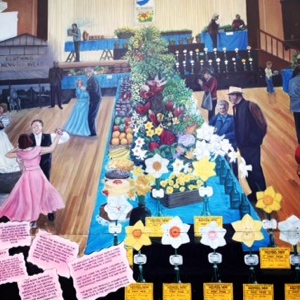 This section was obviously owned by forestry, the felled trees and plantations gave this away. I find one of my challenges is finding places to discreetly do a wee, number one, urinate. Blackberry bushes and other prickly plants lined the sides of this section of the trail.

Fortunately I had made a home made female urinating device out of a Stop Smoke engine fluid bottle before I left so I could at least stand while relieving myself. I had purchased a SheWee a month before leaving and I could never manage to use it without it leaking out the sides which would not have been pleasant out on the trail. I saw a home made version on the internet and made it the day before I left and I am so glad I took the time to make it otherwise this necessity could have become a difficult one. Despite its clunky it looks I am pleased at how well it has worked 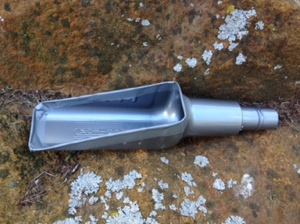 Once I crossed over Sheffield Road again I was once again on a very pleasant section of the abandoned railway. The path was sheltered by trees and the ground covered with leaves which made it a lot softer under foot than the gravel or tar roads. With potaroos jumping off the path as I approached and birds singing in the trees I enjoyed this section of the trail very much.

When I was almost in Sheffield a young couple and a child in a pull along passed me on push bikes. They stopped to ask me where I had walked from. After trading stories they suggested a campsite not far from Paradise that we could stay in that evening, a very fortuitous encounter as I was concerned where we would sleep that night. Once again I hobbled into Sheffield and was glad to see Paul and have a chair to sit down in while we ate lunch and sipped coffee, thanks to Paul ducking across the road to buy one. 🙂

Once again I hobbled into Sheffield and was glad to see Paul and have a chair to sit down in while we ate lunch and sipped coffee, thanks to Paul ducking across the road to buy one. 🙂 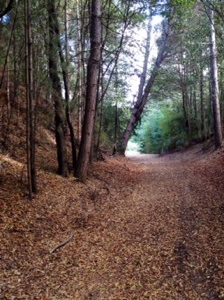 I headed out from Sheffield along Formby Road and turned into Old Paradise Road for the last stretch of the day. Passing farmland and some lovely moss covered mailboxes and glimpses of Mount Rowland I understood why this area was called Paradise, it is a beautiful part of Tasmania.

Paul was waiting and ready to greet me as I slowly marched up the final hill, he was a welcome site at the end of todays walk. The suggested campsite was a blessing because there wasn’t anywhere particularly nice to camp at this spot. We drove to Gowrie Park camping ground paid our $5 and spent our first night camping under the shadow of Mount Rowland, beautiful. 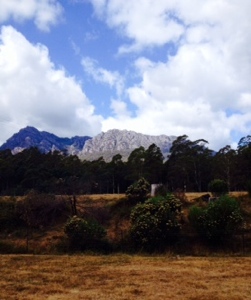 Hi anni. Hope all goes well on your walk. Best wishes to you and Paul. Peter and Helen F.

Hi Helen & Peter, I am so glad Paul shared my blog page with you. It has been quite a journey for both of us.

Her Anni and Paul, sounds like things are going well! Some if the scenery looks amazing! We fine you you and much love, Gwenda. X

Hi Gwenda, the scenery has been amazing all the way so far. I absolutely love walking through it all.